This week I’m featuring Eva Gordon, a lady who has written a lot of books.  She writes steampunk, fantasy, romance, historical … all with a strong romantic element.  If you visit her Goodreads page or her blog, you’ll definitely find something to get stuck into.

As well as her writing, Eva teaches online courses on animal lore, ancient falconry and – I’m so excited by this next one – wolf lore 🙂  When she’s not in her den writing, she enjoys world travel, steampunk conventions, hiking, raptor rehabilitation and wolf sanctuaries.   She loves dark chocolate, red wine and dark deep forests.  Oh Eva, will you be my BFF?

Since she does have so many books under her belt, I’m just going to give you the low-down on Book One of the Realms Trilogy: The Stone of the Tenth Realm.  If you like your fantasy combined with history, then this might be one for you.

Sophie Katz, a Jewish chemistry student, harrowingly escapes a Nazi concentration camp. By way of Prague and with the help of a golem and a magic stone, she is transported into the Tenth Realm, a magical dimension that parallels the world she left behind.

Logan MacLeod, a Scottish warrior, hunted for a crime he did not mean to commit, flees to the Bestiary, a forest so dangerous no man dares enter. Drawn by the haunting sound of his bagpipes, Sophie and Logan meet.

Even as love ensues, the dark evil of the Third Reich threatens the Tenth Realm, led by Gustaf Hissler, Adolph Hitler’s doppelganger.

Together they must join the forces against Hissler in the Tenth Realm and help stop Hitler from world domination in Sophie’s realm. Will they be able to stop the Third Reich before its evil conquers all of the realms?

For the past while I’ve had my nose to the grindstone, so I failed to notice that last week’s featured author in the Goodreads Paranormal, Fantasy, Dystopia and Romance Readers, Writers and Reviewers Group was the lovely Annie B Matthews. I’ve had the pleasure of reading Annie’s first YA book, Talent, and if you happen to like YA fiction with a paranormal and romantic spin, then Talent might be just the book for you.

Annie has been writing since she was twelve, and I’m so glad that she’s finally decided to share her stories with the world. I loved reading about Libby’s journey to discover and gain control of her supernatural abilities.  And, though the book is nicely wrapped up, I happen to know that a second book is on the way.

If you’d like to know more about Annie, you can find her on her blog, on her Goodreads page, or on Twitter.

You can buy Talent at Amazon.co.uk or Amazon.com.  And if you’re a subscriber to Kindle Unlimited like I am, then you can read it for free 🙂

Once again, the spotlight is going to be on this week’s featured author from the Goodreads Paranormal, Fantasy, Dystopia and Romance Readers, Writers and Reviewers Group.  The group made me their featured author a wee while back, and you gotta pay it forward!  This week, Lynn Thompson is the lucky lady.

Lynn’s Goodreads bio (which, by the way, I love):

Lynn Thompson’s place is in the Land of Enchantment, where the sky is turquoise blue, the fires rage, and there is rain and/or snow without a cloud in the sky.

Lynn wades through the craziness of life in order to write fiction, her true passion. In her spare time-which isn’t much-she loves to hike, camp, read, and sit for hours in hot springs.

Lynn doesn’t have a specific genre that she writes her books in. Characters have a tendency to lead her next story. She follows.

You can find out more about Lynn on her blog, twitter, or her Goodreads page, but I would like to give you a sneak peek of her upcoming release, due out on Halloween.

Dark Fates – Madness: Short Stories by Lynn Thompson.  Enter a world of love, loss, teenage angst and betrayal.  Click Here if you would like to preorder the book

Every week the Goodreads Paranormal, Fantasy, Dystopia and Romance Readers, Writers and Reviewers Group features one of its authors.  This week, the featured author is Shari Sakurai. 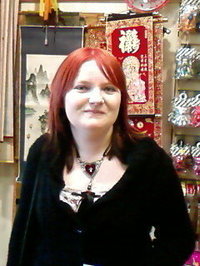 Here’s a little info about Shari:

Shari Sakurai was born in Chichester, West Sussex, United Kingdom.  After completing secondary school she moved away from further education to work in administration.

Shari is very interested in other countries’ cultures and mythology; in particular Japan. Japanese themes and influences can often be found in her work.

Shari’s debut novel Demon’s Blood was released in ebook format on 25th January 2014. She has participated and won the National Novel Writing Month challenge for the past eight years.

You can visit Shari at Goodreads, on her Amazon Author page or on her blog to find out more.  For now, here’s a little peep at a couple of her books:

After vampire hunters force them to flee Tokyo, Taku and his lover,  Thane, try to make a new life for themselves in England. But three months later Thane is still tormented by nightmares of the fire that almost cost them their lives. This leads to carelessness and the discovery of one of his victims.

When faced with threats from all sides Taku tries his best to protect them although his actions are met with disapproval and anger from Thane. Unknown to his lover, Taku is also struggling to keep hidden the truth of what really happened three months ago.

However, it is only a matter of time before Taku’s past and bloodline catches up with him.

It is the year 2115 and the world is very different. With climate changes, natural disasters and war shaping the landscape, England has become a nation made up of several super cities and wasteland in between.

Eric Rawlins is a genetically engineered superhero created by the London Security Agency (L.S.A) to defend and protect the city against both national and international threats. With his superior abilities, celebrity status and beautiful girlfriend, Eric appears to have the perfect life. However, it is an illusion created by the L.S.A in order to control him.

Eric’s nemesis is the charismatic Adam Larimore. The only son of billionaire business tycoon Victor Larimore, Adam is gifted with a genius level IQ as well as the same longevity as Eric.

When the actions of the L.S.A throw the two of them together Eric finds himself questioning everything that he has ever known as well as discovering the true course of events that led to Adam turning to a life of crime. As they become closer Eric realises that the L.S.A may be the real threat to London. But can he trust Adam or is he part of Adam’s plan for revenge against those who have wronged him?